Your first time in Lyon : Day 1 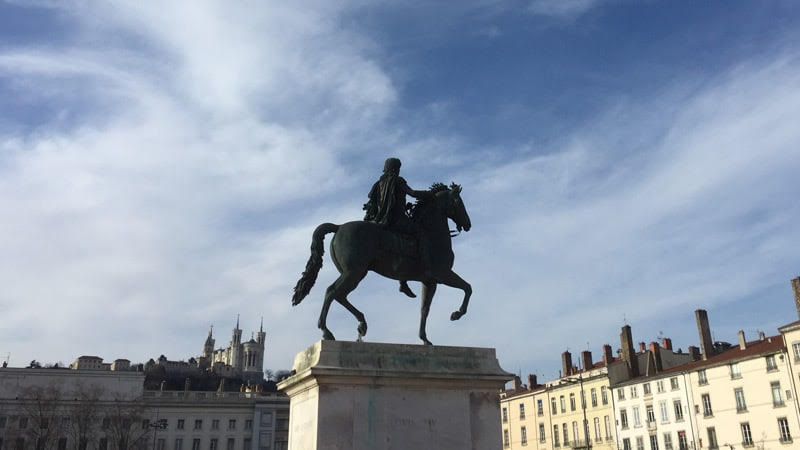 1. The classic itinerary for seasoned tourists who want to see as much as they can!

Begin by visiting the Tourist Office in Place Bellecour. Here you can ask for a map of the city, gather some handy tips and advice, optimise your itinerary, choose a guided or audio-guided tour, and get the LyonCityCard.

While in Place Bellecour, stop for a moment to admire the equestrian statue of Louis XIV (note that he is riding without a saddle, in the style of a Roman emperor!), before crossing the river Saône, towards Fourvière hill (the first stop on the itinerary), which you can make out in the distance.

At the top of the hill, you will immediately spot the golden statue of the Virgin Mary, who has overlooked the city since the 8th of December 1852. Did you know she is the reason locals celebrate the Fête des Lumières (Festival of Lights)?

To get there, take the funicular (known as ‘la ficelle’ among locals) from the Vieux-Lyon metro station (free with the Lyon City Card – just remember to touch on to validate).

From the esplanade surrounding the Basilica, this unique viewpoint offers a panoramic sweep of the whole city. You can see how the city has spread over time to the east, beyond the Saône and then the Rhône. And in the background stand the Alps. You can also visit the Basilica, the construction of which began in 1872 to thank the Virgin Mary for saving Lyon from the Prussian invasion in 1870. Its architect, Pierre Bossan, designed it as a marial fortress – understated and unadorned on the outside and very heavily decorated on the inside. Its huge crypt, dedicated to Saint-Joseph, lets in the light of day, which is quite remarkable for such a structure (the word ‘crypt’ being derived from the Greek word for ‘hidden’).

Just a short walk from here, you can visit Lugdunum, the ancient ruins of Fourvière (entry is free). Take a break on the tiered seating of the grand theatre, which dates back to the 15th century BC and look out over the city below. Just imagine, during the reign of Hadrian the rows of seating went right up to the top of the hill. Below, the smaller odeum was designed for musical performances, rhetoric and poetry, and it still displays some beautiful mosaics.If you are interested in ancient history, make sure you also visit the museum built into the hillside (included in the Lyon City Card).

You can then walk down the hill to the Vieux-Lyon (Old Lyon) district, or take the funicular at the station Antiquaille, in time for a well-deserved lunch break!

This website uses cookies to improve your experience while you navigate through the website. Out of these, the cookies that are categorized as necessary are stored on your browser as they are essential for the working of basic functionalities of the website. We also use third-party cookies that help us analyze and understand how you use this website. These cookies will be stored in your browser only with your consent. You also have the option to opt-out of these cookies. But opting out of some of these cookies may affect your browsing experience.
SAVE & ACCEPT